ASDA kindly arranged for yet another re-delivery scheduled for today, Thursday, at 4:30pm. They were so kind to arrive at 6:30pm with about 80% of the original missing/damaged items.
But I decided to look past that. We scored big. Check out the description of our cupcake mix.

Did you catch it? We get “hundreds and thousands”!!! Of what, it doesn’t say but I’m sure it’s worth hundreds and thousands. And don’t forget the missing “.” too. The back of the box was just as fun to read. Maybe it’s just the English around here but something tells me it has something more to do with ASDA.

There are countless times during any given shopping excursion to Walmart that I walk the aisles thinking, sometimes saying, “I hate Walmart”. Numerous times I’ve gotten into my car after yet another horrible Walmart experience thinking, “that’s it! I’m never coming here again!” Fortunately where we lived in CA we were very close to a nice, big and new Target. That made my Walmart detox much easier. It’s much nicer leaving a store thinking “what’s better than this place?” rather than “there couldn’t possibly be anything worse.”.
Well folks, we found it. We found a store worse than Walmart.
ASDA–one of the many grocery/supermarket stores that will deliver food, toiletries and other home goods to your door for a reasonable or even free if you meet the minimum purchase requirements. We went with ASDA because they had a few things others didn’t.
We placed the order and selected a delivery date and two hour delivery window. Not knowing the exact logistics of the delivering process, we picked a time in the evening when Devin would be home, 7-9pm. When 9:30 rolled around we called customer service who told us they would be an hour late. NBD, right? We stayed up until 11:30 and still didn’t have our groceries.
After some “this is this, and that is that” with customer service we decided just to cancel the order. We went with another store and the order came with zero complications.
A few days later we were still in need of
some things that ASDA offered so we took another stab at it. Delivery time was set for Monday between 6 and 8.
Nothing. No call. No email. Zero.
Until around 10:30pm when they called a few times but Devin was at a movie.
Next morning customer service called and rescheduled for 2-4 that day (Tuesday). 4:30 the delivery man shows up with half the order and some items damaged or spoiled. We decide to accept it anyway.
Customer service arranged for the missing/damaged items to be delivered on Wednesday, of course without apology.
Today is Thursday. We are still missing cake mix, food coloring….ahem, pardon me, colouring, and birthday candles, among other things. Not that I can’t just go to any store but who wants to do that?! I want my dang order!
And there you have it. A store worse than Walmart.

Most days I try to get outside at least once. This can be a challenge when naps and meals keeps us home nearly every minute between 9 and 4. Some days we make it to a store either out of necessity or boredom. Other days i make it short as to keep a schedule, avoid meltdowns or limit the hot mid-day sun exposure. The other day we came across some hydrangeas in full bloom.

Today there was a bit of excitement around town in anticipation of the Olympic torch coming through and a celebration in the park after.

As we headed back in I noticed these signs post a over the covered parking stalls.

The unit of measurement made me laugh. Apparently people around here know the height of things down to the millimeter.

This little girl has done some growing up. Last week she became a master stander. No longer does she have to rely on the couch to pull herself up, she is completely free standing. She seems to like a challenge. She’ll try to pick up various things like a big book or even a step stool while trying to stand up.

Along with her standing skills her chewing skills have improved. Last week her tooth count doubled. doubled. Yep, just two weeks before her first birthday we welcomed toofer number two. At this rate she’ll be driving before she has a full set of teeth. I suppose that’s a good thing because she won’t have to worry about braces until her 30’s.

I am reluctantly about to embark on our second course of potty training. Around May we made some serious attempts with some serious progress. Katelyn got to the point where she was dry for several days in a row. Clean was an entirely different story. After two straight weeks in undies and two straight weeks of cleaning messy undies, I threw in the towel when we found out London was a go and sooner than expected.
This week I got K a step stool and today we should receive a new potty seat in the mail.
But I’m still nervous. If anything she has back tracked with #2 as she no longer tells us after she goes.
I still have yet to figure out the usability of public restrooms and what to do when we go on long day trips to the city and a few upcoming weekend trips. Everything I read says don’t do training right before a trip, a move or any other such event. This makes me want to wait until we’ve settled back into California. We are inching our way towards potty training at three and a half. Embarrassing.

Have I mentioned this girl keeps us on our toes?

We are soon to hit her first birthday. FIRST BIRTHDAY. Weird.
It’s funny to me how much more relaxed I am with Abby compared to katelyn as a baby. I remember when we traveled with katelyn there were so many eating and sleeping ideas that went out the window just because of necessity. Things we needed/wanted just didn’t exist in many of the countries we visited. Right now, Abby and our situation present a few different challenges. As a result, the idea of waiting a few days in between introducing new foods has essentially never happened. Out of desperation, some curiosity with the occasional assistance of the older sister, this child has tried loads of food I’d never before dreamed of even offering my baby. Such as the above pictured croissant and allowing the accompanying mess. But how could I deprive my child of world class pastries? She enjoyed her treat. On the flip side, she doesn’t care at all for ice cream. She baffles me.

With the little I’ve seen of this country, they seem to have a few things figured out that the US just doesn’t. Some seem to be general European things. Like their genius idea to instal shower heads on a hose with accompanying adjustable height mounting. Pure genius. For years devin and I have had a shower head with a hose that we install in any apartment we live in. Best investment ever. Sure beats cleaning the shower/bath with a pitcher or cup.

Another good idea, in theory, is the two options for flushing the toilet. Though the water saver one seems pretty useless to me. But, there are other issues with the toilets, which details I will spare you of.

Another good idea is the somewhat complicated functionality of the door/window. Some have the option to be tilted open or to fully swing open. No matter, the lack of screens is a slight deal breaker for me.

The towel warmer I thought would be wonderful. In actuality, I’ve yet to use it to warm anything and it’s lacking when it comes to hanging more than one towel.

I can’t decide wether the switches for the outlets are useful, safer, or just annoying.

I’m sure there will be plenty more to rave or complain about.

I suppose making the announcement exclusively via Facebook wasn’t quite enough. So, here are the specs.

We are in London. West London, in a spiffy little place called Ealing. Devin is on his last of four rotations before he decides/applies for a permanent team at Apple. The assignment is for six months and we have plans to be back in CA in mid-December.

We have a lovely two bedroom “flat” with one and 3/4 bathrooms. It’s in a great location near bus stops and a comfortable walk to plenty of shopping. There are a couple parks near by as well. One of the things we forgot to research when looking for a place to live was the location of fire and police departments. For safety sake we decided to get a place a few doors down from both. For sanity’s sake, we forgot to get a place much, much further from both. On the up side, the girls love watching and listening to the emergency vehicles speed by.

I guess I need to get taking some pictures so I can share some more.

Though our apartment is “fully furnished” we realized we needed a trip to some store that would provide a few items that we desired. Like something besides a super thick comforter to sleep under. So we checked out the bus routes and loaded up the girls for a trip to Ikea.
We ended up with a few more items than we intended to get. Or maybe it just seemed like more when it came to bagging it up for the ride home. 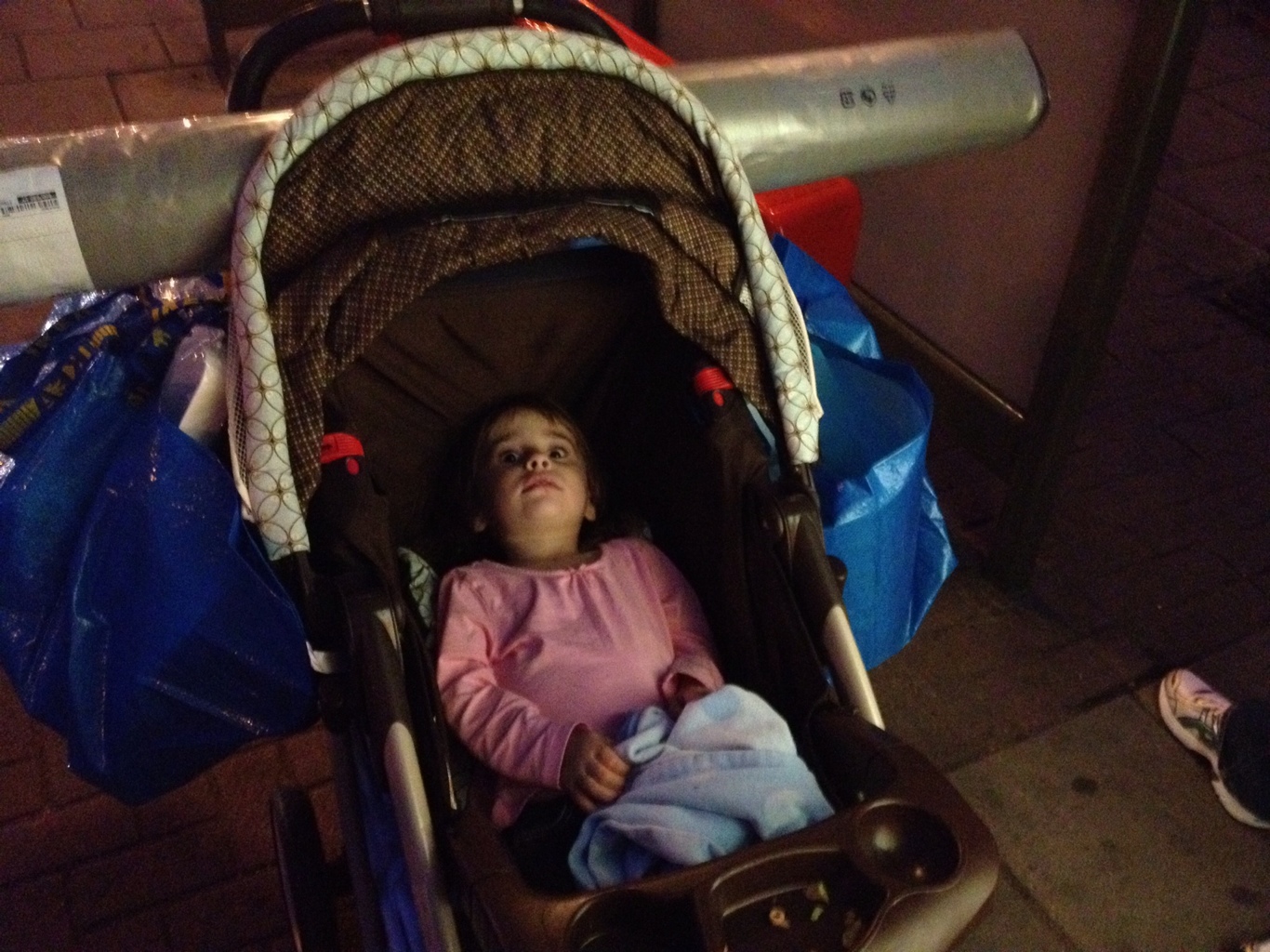 We were quite the sight. Katelyn in the stroller with a full basket under her, two large ikea bags tied to either side and a small room rug all taking the bus home at 10pm. The picture doesn’t quite capture how silly we felt that night. But we had our towels, bath mats, high chair, and other things that made it totally worth it.

It was a long road getting here, in more ways than one. We’d been working on the idea for nearly a year. I can’t even count how many moments of excitement, then disappointment, then pure insanity we went through. It wasn’t until about two weeks before we left that everything finally came together and it seemed we finally hit the “100% chance” mark. It was only after that when we actually started packing up our apartment and readying things for storage or a trip across the pond, as it were.
In the few days before leaving we felt extremely fortunate to have friends who invited us for dinners, brought us dinners, and watched the girls, among other things. The help and offers for help were incredible!
The final day of departure was a bit overwhelming. We finished packing the apartment, packed (and re-packed) our bags, made arrangements to drop off the car for storage, and then left the cleaning to the professionals. Thank. Good. Ness.
Arriving at the airport in what seemed to be plenty of time, we first set out to get better seating arrangements. As in, next to each other. Before we knew it, it was time to board and take a seat in our recently secured bulkhead seats. There are definite perks to traveling with a baby.
Before we even took off Katelyn got restless. The iPhone saved the day. About an hour or so into it, she was asleep and we laid her on the floor Abby took a little longer and wasn’t always a fan of the bassinet but in the end everyone got some rest.