Is it too early to be getting impatient?

During the past week or so I’ve been feeling anxious about getting things ready for the baby. Many of you know that we have put off buying many things because it doesn’t make sense to purchase things here in California where we would probably pay more for them, pay a lot more in sales tax, only to pay more in gas money for the trip home if we had a car loaded full of baby stuff.  Daily I’ve been watching the prices for the bigger ticket items that we need to purchase like a stroller and car seat.

With the help of my sister and a some suggestions from a few others, I picked out this stroller very shortly after we found out we were pregnant. 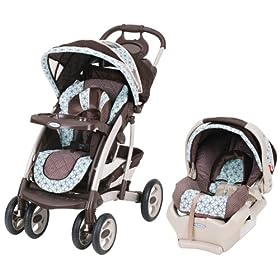 I wanted something that would last for several kids, boy or girl.  It’s one of the heavier models but the seat is rated for up to 32 lbs (while others were in the lower 20’s), has a front harness tightening strap, and the stroller seat reclines flat so you can actually fit two kiddos in there if you want.  Since I picked it out by just looking online, I was hoping that the pictures represented the actual look of the fabric print and colors.  I’d never seen the set in person since Toys/Babys R Us, Target, or Walmart didn’t carry them in store. But then my mom and sister said they saw it at Burlington Coat Factory.  So on Friday Devin and I took a quick trip to Burlington and saw it along with the matching porta crib that we wanted to get.  It’s cuter and more gender neutral than I thought and now I’m really excited for it!

Today we ordered the porta crib online from Diapers.com.  Devin did some sneaky coupon stacking and managed to get it for about $125.  Being new customers we got $10 off any diaper order so we bought some newborn size to get us started.

Last week we bought the swing that I had mentioned before on eBay.  Some amateur flooded the market with about 5 of them all ending within minutes of each other so we got it for $35–about half the price I found anywhere else.

Now the only major purchase we have left is the stroller/car seat set. EBay hasn’t been the best place for that because there are a bunch of people who are selling them way above the price amazon has or even suggested retail. There is this one guy who keeps posting it over and over again because he’s not selling it.  He keeps trying to sell it for about $100 more than amazon has it for which is crazy and very annoying.

I was going to go back to Burlington on Saturday while Devin had an internship activity, but then someone decided they wanted to be a jerk which ultimately ruined my day. Instead I went home and watched some movies and took a nap. At some point I’ll get into the baby shopping mood again and hopefully get a better idea of the things we need to get once we get back to Utah.

One thought to “Is it too early?”